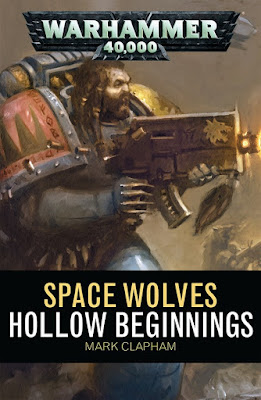 Space Wolves. Space Wolves everywhere. In the buildup to what I am guessing will be a grand mal Wolfgasm surrounding the release of Aaron Dembski-Bowden's Ragnar Blackmane, the lupine space vikings have infiltrated pretty much all of the new release slots over at the Black Library (still waiting for them to pop up in Age of Sigmar, which would be a marked improvement). Really don't need to restate that the wet leopard growl Sons of Fenris aren't my favorite Chapter, so what I will say is that so long as they are written in as fun a manner as we get here in Hollow Beginnings, I don't mind them one bit.

Another simple story premise here: we meet up with a Space Wolves pack, led by one Sergeant Anvindr, as they are helping to close up a campaign on the planet Durrl, spearheading a mission to retrieve the head of the warboss Stumpgutz. Well, actually, the first few pages of the story focuses on a detachment of Tallarn Imperial Guard, as they run cleanup duty on the perimeter of Stumpgutz's smoldering fortress. This is a nice little treat; since the Tallarns get almost no page time in recent Black Library offerings.

The actual action setpiece involving the retrieval of Stumpgutz's noggin comprises the middle of hollow Beginnings. And it is a very nice piece. The inter-pack banter is fun without teetering into obnoxiousness, and the action is solid. There's something about two primal warrior groups like the Space Wolves and Orks going literally toe to toe that makes the action extra crunchy. And it's not just the fight scenes that are done well. Clapham does a superb job setting tone, as evidenced in lines like this:


"Victory required someone to take the head of the warboss, even if it was just hacked from its scorched corpse. Proof of death was required, a trophy to take for the glory of the Emperor, and Anvindr decided that he and his squad would be the ones to take it."

So, if the main battle is resolved 3/4 of the way through the story, what else is left? Well, first of all, let me state this. I did not realize heading into Hollow Beginnings that this isn't the first outing for Anvindr and his pack. Clapham actually penned another tale featuring them, In Hrondir's Tomb, which you can get in its original release in Hammer & Bolter 20 (along with a bunch of other good stories) for $2.99, or you can buy it on its own from the Summer of Reading program for $4.99 a la carte. You don't need to be a business major to spot the better value there. Anyway, I hadn't read it before, but now most likely will. This is a fun pack to follow, and further adventures with them look promising.

That brings us to the ending, which serves as a segue to the next tale (and also clarifies the wordplay of the story title). For this portion of the story, I'm thinking that reading In Hrondir's Tomb probably clarifies the emotional response much better, but even the first time reader can piece together what's transpiring.

In closing, reading In Hrondir's Tomb isn't a prerequisite. This story is very enjoyable on its own. The Space Wolves are done well, the Orks are done well. I just wish we could've seen more of the Tallarns.

Small Nitpick (Minor Spoiler):
I will mention one portion of the big action piece that did bother me. During the clash between the Wolves and Stumpgutz, Anvindr gets his bolter knocked out of his hands, leaving him to rely on his chainsword. Once his chainsword is destroyed, he is immediately charging in using his bolter. It might seem too particular to harp on this minor detail, but just one sentence would have clarified that a speedy retrieval had taken place. Anyway, very minor thing.

Here's what it is:
A pack of Space Wolves head into a burning fortress to give a nasty ork warboss the unkindest haircut of all.

See? Much better without the all-black background, especially when the character image is done in muted colors.

Goblin Slayer Side Story: Year One